On 25 February, ANTICORRP partner Romanian Academic Society (SAR), together with the Chancellery of the Romanian Prime-Minister, and the Ministry of Justice, organized a conference titled “2016, the Decisive Year for Public Integrity Reform,” looking at the state of public integrity in Romania and what can be done to improve the control of corruption.

The conference was attended by over 150 distinguished guests from public institutions, civil society, and media organizations. Its main conclusion was that punitive measures alone are not enough to truly reduce corruption and that good governance requires a more comprehensive approach, centred on administrative reform. Emphasis should be placed on accurately measuring the level of corruption a given country and identifying what worked in reducing it. Ultimately this should aim at finding policy measures that would lead to genuine improvement of “public integrity”, understood as a country’s capacity to control corruption.

Prime-Minister Dacian Cioloş highlighted the need to prevent corruption as well as prosecuting of previous corrupt activities. He pointed out that public officials do not only need integrity, but also competence and responsibility. He gave an example of an efficient administration by pointing at state documents that need two signatures- a sign that public officials are not afraid to take responsibility for their actions.

How can we tell if we are doing better or worse?

Professor Alina Mungiu-Pippidi followed-up on the Prime-Minister’s speech by pointing out that there is a growing belief in Europe that success in the public sector is less due to hard work and merit but more due to corruption; this fact makes perception-based measurements of corruption highly inaccurate over the short-term. This is why she introduced a new instrument, created for the Dutch Presidency of the EU, the so-called Index of Public Integrity. This index can be used to make accurate assessments of integrity levels in EU countries, as well as over different years.

One major topic in this respect in Romania is public procurement in the construction sector: Romania spends more than any other European country, yet generally has poor quality results. As there are so many opportunities for corruption, particularly in the construction sector, a specialized anticorruption agency cannot address these by itself without prosecution powers. Evidence in this respect shows a reduction in control of corruption scores over five years in countries that established anti-corruption agencies with such powers.

Effective control of corruption requires a balance between constraints and opportunities. This has to include corruption “proofing” legislation instead of drafting special anticorruption laws, simplifying the bureaucratic apparatus and its output, and digitizing public services in order to reduce corruption opportunities. Constraints refer to monitoring public institutions through online interactions, auditing and judicial independence. Professor Mungiu-Pippidi ended her presentation by presenting comparative graphs of Romania’s overall public integrity scores in 2014 and 2015, and explained how well public integrity correlates with established corruption measurements based on perception such as the World Bank’s Control of Corruption indicator or Transparency International’s Corruption Perception Index.

Read the chapter (Romanian only) on how to prevent corruption here.

Bogdan Chiriţoiu, President of the Romanian Competition Council, praised the use of objective data in corruption measurement and urged government authorities and academia to work closer together on policy solutions, warning that there is no “silver bullet” for tackling corruption. Speaking of what can be done in order to improve public integrity, he mentioned monitoring procurement procedures and contracts to ensure competitiveness, as well as making data about them available online in a more user-friendly open data format. He also suggested simplifying legislation, which Romania is doing with the help of the OECD. With regard to state-owned companies, Mr. Chiriţoiu expressed concern over the still oversized and largely inefficient public sector, which would at least in terms of transparency benefit from private management and being listed on the stock-market. The public sector as a whole, he argued, would benefit not only from depolitizising public agencies, but also from providing higher wages for public officials and from preventing incompatibility issues by following up on former state employees who are hired by private companies. 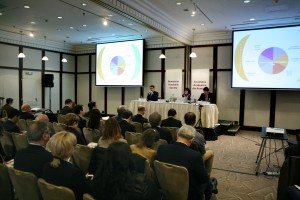 Dragoş Tudorache, Head of the Prime-Minister’s Chancellery, agreed that corruption often stems from poor legislation and suggested transparency as a means to help predicting corruption risks. He underlined that measures taken by the present Government to increase transparency include a registry of meetings with lobbyists and disclosing public spending by appointing private managers to all state-owned enterprises and creating a core of professionals to serve on their boards. With regard to transparency of public spending, plans were announced to make the allocation of government funds to public authorities conditional on their active disclosure of public expenses on a centralized online platform that will soon be launched. Thus, all public spending will be accessible online, making it harder to misuse funds. In addition, one of the Government’s goals is to apply for OECD membership, along with Argentina and Thailand, which would lead to several years of international monitoring on how reforms are carried out in Romania.

Following the guest-speakers, Professor Mungiu-Pippidi presented results of research carried out within ANTICORRP’s Work Package 8 on the preferential allocation of public procurement contracts in the construction sector in Romania from 2007-2013. The main indicators used to measure particularism were single bidding, the winning firm’s political connections and agency capture (understood as the allocation of over 50% of a public entity’s procurement budget to a single company when that entity awarded at least three contracts of over one million euro in a single year). The data indicate a steady decline in these types of preferential allocation practices. Yet, this may be the result of more subtle corruption techniques being developed, a sign that more monitoring is required.

Read the chapter (Romanian only) on government favouritism through public procurement in the Romanian construction sector here.