Last month two books were published by ANTICORRP: one is a Cambridge University Press monograph by Alina Mungiu-Pippidi “The Quest for Good Governance. How Societies Develop Control of Corruption” and the other is an edited volume “Elites, Institutions, and the Quality of Government” by Carl Dahlström and Lena Wängnerud published by London Palgrave Macmillan. 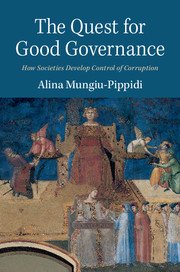 Why do some societies manage to control corruption so that it manifests itself only occasionally, while other societies remain systemically corrupt? This book is about how societies reach that point when integrity becomes the norm and corruption the exception in regard to how public affairs are run and public resources are allocated. It primarily asks what lessons we have learned from historical and contemporary experiences in developing corruption control, which can aid policy-makers and civil societies in steering and expediting this process. Few states now remain without either an anticorruption agency or an Ombudsman, yet no statistical evidence can be found that they actually induce progress. Using both historical and contemporary studies and easy to understand statistics, Alina Mungiu-Pippidi looks at how to diagnose, measure and change governance so that those entrusted with power and authority manage to defend public resources.

The Quest for Good Governance presents a comprehensive empirical theory of governance unifying important disparate contributions in the areas of corruption, quality of government and rule of law and is the first attempt to directly answer the big question of what explains virtuous circles in good governance. It features research and policy tools to diagnose and build contextualized national strategies.

According to Larry Diamond, Director, Center on Democracy, Development and the Rule of Law, Stanford University ‘[t]his is one of the most important books ever written on the most universal governance challenge of our time – how to control corruption. In this brilliant integration of theory, history, case studies and quantitative evidence, Alina Mungiu-Pippidi shows how countries move from the natural state of corruption, clientelism and particularistic governance to the impersonal norms of fairness, integrity and transparency that make for good governance. This is an indispensable work for any scholar, student or policy-maker who wants to understand how societies mobilize and states reform to control corruption.’

The book was published on 27 August 2015 as a paperpack and hardcover. Please find more information, as well as order the book on the website of Cambridge Univeristy Press. 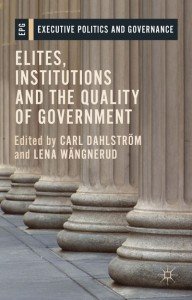 Elite politicians, bureaucrats and businessmen hold the fortunes of societies in their hands not only because of their direct influence on politics, administration and economy but also since their behavior indirectly signals how things are done. How are elites persuaded not to use their privileged position to enrich themselves at the expense of the society at large? The answer from research, so far, is through formal and informal institutional constraints, which in different ways alter incentives at the top.
This edited volume contributes to the knowledge of the interaction between elites, institutions and other constraints and how this affects corruption and other forms of bad government. It problematizes the incentives for elites and masses to fight grand and petty corruption, respectively, and demonstrates the importance of elite constraints for good societies, where infant mortality is low and life expectancy and satisfaction are high. It also explores the behavior of a largely unconstrained elite group, namely the diplomatic corps, and shows how corruption not only takes the form of money transfers but also of sexual exploitation.

It reveals how even rather distant historical experiences incite elites to behave either in line with their immediate self-interests or with the interest of the society at large. Taking a step further, it considers different ways in which elites’ preferences are more closely aligned with the general interest when, for example, monitoring mechanisms are introduced through interactions between recruitment regimes to the bureaucracy, or economic motivations and democratic accountability. Finally, it explores how political parties can be a positive force in the fight against corruption and bad government.

According Per Lægreid, Professor in the Department of Administration and Organization Theory, University of Bergen, Norway ‘[t]his is an excellent book both theoretically, methodologically and empirically. It addresses the important question of how the level of democracy and the quality of government effects the development of a good society. It gives new insights on how institutions constrain elites from destructive and corrupt behavior.’

The book was published in August 2015 as a hardcover and an Ebook. Please find more information, as well as order the book on the website of Palgrave Macmilan.