ANTICORRP partner Hacettepe University, together with Transparency International (TI) Turkey, (Uluslararası Şeffaflık Derneği) held a day-long conference in Istanbul on 7 April 2016. Und the headline “How is Turkey Being Governed? Principles of Governance Institutions in Turkey” the conference offered a comprehensive agenda featuring prominent speakers and an wide-ranging audience, including representatives of international organizations, public institutions, private companies, civil society organizations and the media.

In her opening speech, Oya Özarslan, President of TI Turkey, highlighted critical issues related to integrity and democracy in Turkey. She argued that, at the moment, Turkish democracy is experiencing a U-turn and that this might be the first and the last time a National Integrity Assessment (NIS) report is prepared in the country under a parliamentary system of governance. Following her talk, Yalın Hatipoğlu of TI Turkey presented major findings and recommendations from Turkey’s NIS Report. The report reveals a relatively weak picture of Turkey’s governance institutions: out of the 15 institutions assessed, 11 were classified as ‘weak’, and only 4 rated as “moderate’. The overarching systematic challenge for Turkey’s national integrity system is the failure to adequately separate powers and keep the executive in check. The undue influence of the executive over other institutions, such as the legislature, judiciary, ombudsman, and media undermines the rule of law and democratic processes in the country.

An English version of Turkey NIS Report is available here. 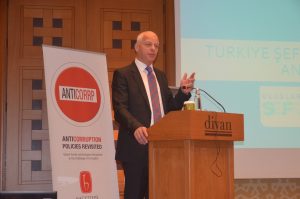 One of the keynote speakers in first session of the conference was Hansjörg Haber, Ambassador of the European Union to Turkey. He highlighted the EU’s support for ethics and anticorruption in Turkey by giving examples from recent projects undertaken by public and nonprofit organizations. Another was keynote speaker, Drago Kos, Chair of the OECD Working Group on Bribery and member of of the ANTICORRP steering committee. He critically reflected upon Turkey’s NIS Report by echoing the Report’s main points about the undue influence of the executive power over other branches of government, as well as the growing gap between the existing legal-institutional framework and its implementation in the country. He argued that Turkey is an important country in many respects and deserves better than the current bleak picture in terms of ethics and good governance: Turkey should transfer itself into a model in the area of fighting corruption, too.

Following the opening session, the conference continued with three consecutive panels. The first panel, under the headline of “Institutionalization of Governance in Turkey and the Accession Process to the European Union”, brought together lawyers, politicians and journalists. The panelists discussed ongoing challenges to the rule of law and democratic governance in Turkey, presenting cases and concerns derived from recent developments in the country. 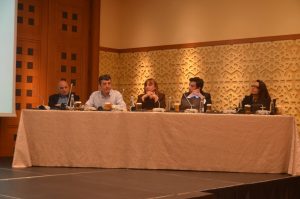 The second panel, titled “Public Procurement Systems, Privatization and Transparency”, brought together three researchers and a journalist. Professor Muhittin Acar presented results of the research he and Professor Uğur Emek conducted within the scope of ANTICORRP’s Work Package 8 on public procurement in the construction sector in Turkey. He pointed out frequent revisions to the Public Procurement Law (PPL) over the years (35 amendments in 11 years that changed 135 sub-provisions) He highlighted the challenges that emerged through expanding of exceptions, which left a growing number of contracts out of the PPL. He also emphasized the need for paying long-overdue attention to major policies and rules related to public-private partnerships (PPPs) in the country, as well as to institutional autonomy and capacity of public bodies regulating, overseeing and managing public procurements. You can find their report here.

The conference ended with a last panel on “Public Sector, Procurement Networks, Urban Regeneration and Civil Society”. Local activists and representatives from NGOs discussed why and how emerging urban regimes in the country are presenting new governance challenges and ethical dilemmas to all stakeholders that are involved.